Not to burst your bubble, but dieting does not work and there’s research to prove it. Long term studies that followed dieters and their progress have shown that by and large dieting – the way that most people do it – is ineffective and it may even be counterproductive. Only 5% of dieters are able to maintain their weight loss after 5 years. A 2007 study showed that the majority of people who followed a restrictive diet ended up gaining back more weight than they lost. And, a 2012 study linked dieting to higher incidences of depression, body dissatisfaction and poor self-esteem. 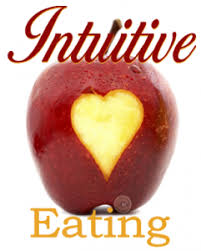 So, despite what the mass media and marketers would have you believe, paleo, vegan, low-calorie, low-carb and all the other fad diets out there will not lead you to lasting weight loss. Then what’s a person to do? Experts say that if you want to lose weight and keep it off, the key is to listen to your gut. They’re calling it intuitive eating (IE). It’s about changing people’s relationship with food and helping them view food as fuel for their bodies. IE encourages people to base their eating on hunger and fullness cues rather than on a restrictive list of good and bad foods.